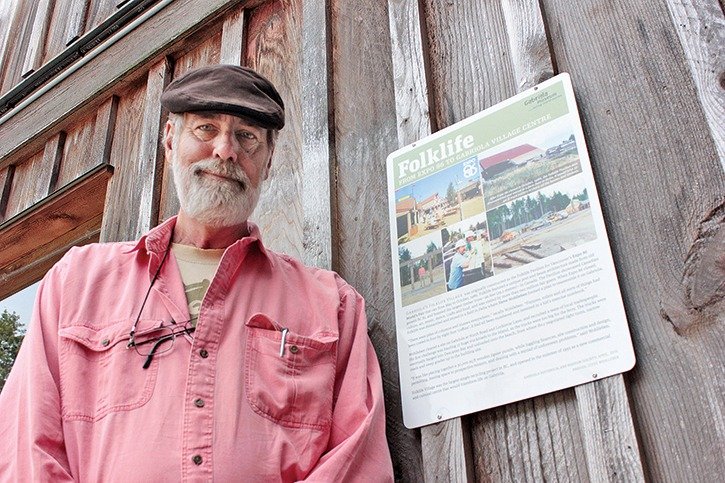 Before the 1990s, life on Gabriola Island was very different than it is today.

Getting groceries usually meant having to commute over to Nanaimo and there wasn’t a central gathering place for island residents.

“There was no pharmacy. There was no major grocery store. There was no library,” said Ivan Bulic, director for the Gabriola Historical Society and Museum. “People generally went to Nanaimo to get what they needed.”

However in 1993, that all changed after the construction of Gabriola’s Folklife Village.

“It has really created a cultural and a commercial centre for the island,” Bulic said. “Prior to Folklife there were really only three villages, if you want to call them that, on the island.”

The history of Folklife Village is as unique as the artists who call Gabriola home. Folklife Village was originally constructed and used during Expo 86 in Vancouver. Originally called the Folklife Pavilion, it featured unique post-and-beam architecture made from old growth B.C. fir and showcased Canadian culture, art, music and dance.

Following the conclusion of Expo 86, the pavilion was dismantled and stored in a field in Delta, B.C. A few years later developer Steve Wohlleben acquired the structure and had it shipped to Gabriola, where he constructed the current Folklife Village.

Last Tuesday, the Gabriola Historical Society and Museum paid tribute to the the 30th anniversary of Expo 86 with a commemorative plaque that highlights the history of the Folklife Village and its connection the World’s Fair.

Speaking to a crowd of 30 people during the ceremony at Folklife Village, Wohlleben said it’s an honour to have the village recognized and that its success is directly related to those who made it such an inviting place to be.

“Folklife owes its success to the people who helped to create it, the tenants who took the chances to build new enterprises and obviously you the clients, who make or break every business on the island,” he said.

The construction of Folklife Village on Gabriola Island was single largest recycling project of its kind in the province, according to the historical society.

Wohlleben became interested in the idea of creating a village on Gabriola after having spent time on the island and realizing there were limited services available.

“There was no place to eat and there was very few services,” Wohlleben said.

He spent nearly six years trying to acquire the deconstructed village in Delta, before finally getting his hands on it. Folklife Village, which is roughly 2,787 square metres, was officially opened in 1993.

“The timing couldn’t be more perfect,” he said.

In the years that have followed, Folklife Village has become a gathering place, cultural hub, commercial centre and so much for the residents on Gabriola.

Wohlleben said it’s special to know that something he created helped transform the island in such a positive manner.

“It’s rewarding because [development] has been at a pace that has suited the island,” he said. “It hasn’t got out of hand and it has character.”